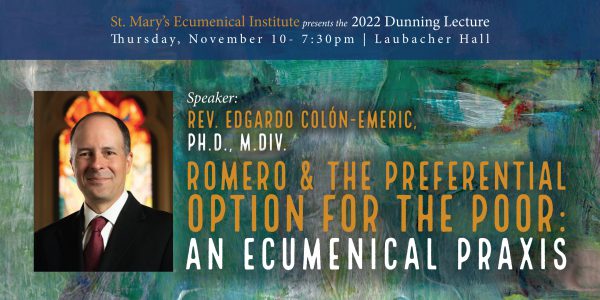 Event is free to join in person or online, but registration is requested 2022dunning.eventbrite.com

Colón-Emeric’s work explores the intersection of Methodist and Catholic theologies, and Wesleyan and Latin American experiences. Colón-Emeric has served on the United Methodist Committee on Faith and Order and on both national and international Methodist-Catholic dialogues. In October 2017, he met with Pope Francis as part of a delegation from the Methodist-Catholic Dialogue and presented the pope with a Spanish translation he created of the dialogue’s bilateral statement.

Colón-Emeric’s latest book The People Called Metodistas: Renewing Doctrine, Worship, and Mission from the Margins was released this summer. His other books include Wesley, Aquinas, and Christian Perfection: An Ecumenical Dialogue (Baylor University Press, 2009) which received the 2008 “Aquinas Dissertation Prize Winner” from the Aquinas Center for Theological Renewal at Ave Maria University and Óscar Romero’s Theological Vision: Liberation and the Transfiguration of the Poor (Notre Dame University Press, 2018), which received first place in the 2019 Catholic Press Association award for books about newly canonized saints.

From June 8-10, 2023, St. Mary’s Seminary & University will host a conference titled “The Primacy of God in a Secular Age: On the Theological Virtue of Faith.” The conference is sponsored by The Sacra Doctrina Project in partnership with SMSU.

Featured Speakers will be:

The conference is currently requesting papers. Those interested should submit a 300-word abstract proposal via The Sacra Doctrina Project website. Priority consideration will be given to proposals received by December 15, 2022; proposals will also be accepted through January 1, 2023.

The National Conference of Diocesan Vocation Directors (NCDVD) held their annual convention in Baltimore from September 2-9 at the Hilton Inner Harbor, next to Camden Yards. To thank the participants for visiting Baltimore and to show them the wonderful formation opportunities at St. Mary’s Seminary & University, a special “Night at the Parks” was held on September 6.

Approximately 100 vocation directors came to Roland Park from the hotel. The evening began with Vespers in St. Mary’s Chapel; Archbishop William E. Lori, presided. Then, they joined the seminary community for an Orioles-themed “tailgate” dinner in the refectory. The meal was preceded by a short video greeting from none other than Cal Ripken himself. September 6 marked the 27th anniversary of the night Cal broke Lou Gehrig’s consecutive game streak.

The evening continued with transportation from Roland Park to Oriole Park where the vocation directors saw an Orioles home game, accompanied by St. Mary’s President-Rector, Fr. Philip Brown, P.S.S., and a number of faculty and seminarians.

The vocation directors were mightily impressed with the creativity and depth of St. Mary’s hospitality.

St. Mary’s Center for Continuing Formation is currently accepting registrations for the annual New Pastors’ Program to be held November 6-11, 2022 at the Center on the St. Mary’s campus in Baltimore, MD.

See the detailed schedule and download the registration form on the New Pastors’ Program page.